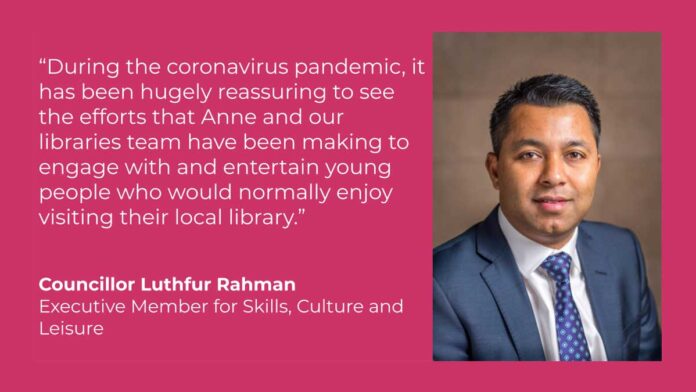 A member of staff at Manchester Libraries has written and illustrated her own children’s story, as part of the service’s bid to keep residents engaged and entertained while libraries are closed.

Anne Sharp, who works at Longsight Library and Levenshulme Arcadia Library, was looking to contribute to the libraries’ service’s efforts to keep residents engaged with reading and learning  during the lockdown.

At first, she had intended to post a virtual story time using classic childrens’ books to the Manchester Libraries YouTube page. However, issues with copyright law meant this could not be done.  Instead, Anne then realised she could write her own story, something she has always wanted to do.

The book, “Around the World in a Day” is based upon  the adventures of two old family favourites, Nutty and Wilson – her son Owen’s two beloved teddy bears from when he was a child. The two teddy bears are shown on their grand adventures trekking around the world.

Anne said: “The response has been amazing, parents have commented that the video has had a hugely positive impact on their children, with some being inspired to write and illustrate their own stories.”

Anne described her inspiration for drawing on previous experiences with the two teddy bears, mentioning that they would always place them in weird and wonderful places.  So she started doing it again, this time taking photos so she could later sketch them later.

The first book and the online story telling session was such a success Anne has already begun penning a sequel, adding: “I had so much fun creating this book, and it’s something I have always wanted to do. The reception has been truly overwhelming that I thought “why not keep on going”.

Other members of staff at Manchester Libraries have been offering different ways of keeping busy during lockdown, including how to make a lava lamp, a bird feeder as well as baking tips.  To find all of the videos posted, including Anne’s story, go to:

Executive Member for Skills, Culture and Leisure, Councillor Luthfur Rahman: “During the coronavirus pandemic, it is hugely reassuring to see the efforts that Anne and our libraries team have been making to engage with and entertain people who would normally enjoy visiting their local library.

“Through her creativity in writing, illustrating and telling this story, Anne is helping to inspire the next generation of storytellers, which shows that despite the essential closures of our libraries for now, there are no boundaries in the sharing of information, given the technology we now have.

“If you haven’t watched the story already I would encourage you to, and for those families looking for something to do during the continued lockdown why not visit the Libraries YouTube channel to see what inspiration it can provide for your children”.

A brand new three year plan has been launched that sets out how the council will work with other organisations in Manchester...
Read more
Appeals

Did you witness a robbery in Manchester?

At around 9:30pm on Sunday 5 July 2020, police were called to Ancaster Walk in Manchester to reports of a robbery.
Read more
Crime

A man has been jailed for over two years following a robbery spree in Hulme.

**UPDATE, MONDAY 7 JULY** Caine has now been arrested and will be recalled to prison, thanks for sharing/coverage Know...
Read more

GREAT NEWS FOR BOOK LOVERS – OUR LIBRARIES ARE OPENING AGAIN

The news book lovers were waiting for! From today (Tuesday) our libraries are reopening,  but with all the new safety measures you...
Read more

A visually impaired man from Hale Village is part of of a regional campaign to get people staying active during lockdown –...
Read more

Halton Borough Council has published its Local COVID 19 Outbreak Prevention and Control Plans which set out how To...
Read more
Load more

ABOUT US
Lifestlye / Whats on / Active Kids / Local News
Contact us: life@locally.news
FOLLOW US
©
Change Location
To find awesome listings near you!